This is a portrait of Captain Henry Hope, British Naval officer. Scottish painter Sir Henry Raeburn painted the piece around 1815. The portrait itself is about average for Raeburn, who painted thousands of subjects over his fifty-year career and later became the royal limner (painter) to King George IV in Scotland. However, for Hope, this painting represented the most famous battle of his career- he had successfully defeated the Americans in a major naval battle in the War of 1812. 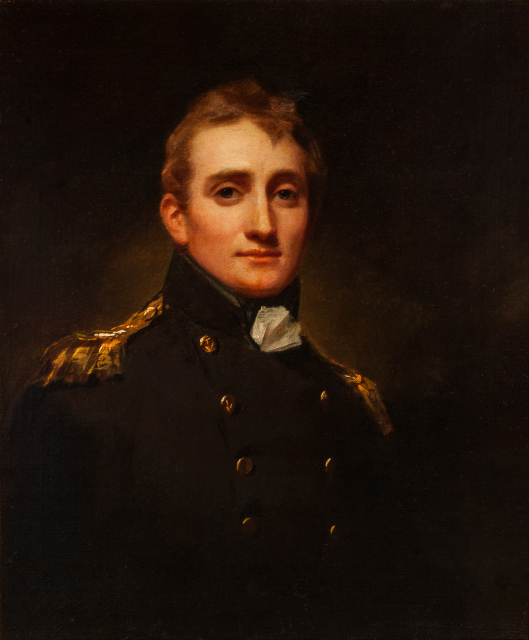 The War of 1812 was the start of a new era in British-American politics. Since the end of the Revolutionary War, Great Britain hadn’t interacted much with the United States, and therefore hadn’t fully acknowledged them as a separate country. The United States conducted most of their trade with the French, since they had been allies during the Revolution, and mutually hated the English. Meanwhile, American expansion had begun to reach farther towards the Northwest Territory, further threatening the British presence in North America. In response, Prince Regent George IV attempted to step in by blocking American maritime trade with France. The Royal Navy also increased their impressment of men into the military or into paying extra taxes, including men who had identification of US citizenship. Tensions increased rapidly, and by 1812 the countries engaged in formal warfare, with a strong emphasis on naval conflict.

Hope was the seventh of ten captains to command the HMS Endymion, the British Royal Navy’s fastest and most successful sailing warship at the time. Hope’s job was to provide maritime support to the British in New England. Although the American forces were significantly smaller than their opponents, they fought with a frightening intensity that made it very hard for the British to get a solid victory. Finally, in January 1815, Hope and Endymion fought the USS President in Britain’s most successful battle of the war. Endymion chased President down in open waters before defeating her in battle. After almost three years of unexpected defeats, this victory was monumental to the British. Shortly after, the countries settled on peace treaties and left the war as a draw. Hope received a silver platter as an award, but he then chose to honor the officers that served him with silver crooks, probably made from his own platter. Raeburn’s painting of Captain Hope is therefore the only surviving commemoration of British success during the war. It represents the peak of the British Royal Navy’s sailing warships, and the birth of the relationship between the United States and Great Britain as they began to see each other as separate nations, and not colonies.

This video gives a quick, American overview of the War of 1812. It also touches on the burning of Washington D.C., the US’s attempts to access Canada, and the origins of the Star-Spangled Banner as our national anthem. The War of 1812 is arguably the most overlooked American war, but this video highlights the lasting effects the war had on American politics and culture.

Note: The speaker references the ship USS Constitution, known as “Old Ironsides.” See resource #3 to learn more about that boat and the start of the American Navy.

CBS: When the British Burned the White House

This source, filmed mostly inside the White House, talks about another important British victory during the war- the burning of the White House. The video explains both how the British forces attacked the capitol, why they did it, and how First Lady Doley Madison responded by saving as many items from the house as she could, including the famous portrait of George Washington. It also highlights the contrast between land and sea warfare throughout the war.

The USS Constitution is an American heavy frigate that was built and launched at the same time as Endymion. She is the world’s oldest boat, of any type, that is still afloat in water, and is the oldest commissioned military vessel in the world. For her 200th anniversary, Constitution sailed unassisted for 40 minutes. It was her first sail in 116 years, and the crew spent several months preparing for it by learning from an 1819 Navy sailing manual.

Constitution now serves primarily as an educational resource for the US Navy, and has a large, well-maintained museum and online resource center. Their website has many lesson plans and activities for classroom and independent use. Also linked are two videos of Constitution firing off her first 21-gun salute since the start of the Covid-19 pandemic. The last video shows some glimpses of the view on the boat and the crew’s uniforms.