This cup was created in the sixth century BCE when artistic taste was transitioning between black-figure and red-figure pottery. This image shows the interior of a drinking cup displaying the Greek god Hermes. The Hermes figure is an example of black-figure pottery, which shows black figures on a red background. For this technique, the artists paint figures as silhouettes then carve contours and small details before firing. 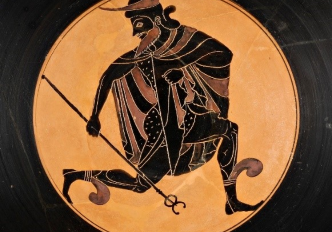 Image b, the outside of the cup, is an example of red-figure pottery. This cup is called “bilingual” because it shows both styles of pottery: red-figure on the exterior and black-figure on the interior. Most of these black and red-figure pieces were made in Athens and Corinth and were traded throughout Greece and neighboring areas, including Etruria. For more information on red-figure pottery, see Resource 1. To explore the evolution of Greek sculpture, see connections.

Most black-figure pottery depicts mythology and the day-to-day life of Ancient Greece, including the Olympics. To learn more about the origin of the Olympics, see Resource 2.

The interior of this piece (image a) portrays Hermes, the messenger god, and son of Zeus. Hermes is usually shown holding a staff and wearing winged sandals. He was credited with creating fire and the alphabet. To learn more about the mythology of Hermes, see Resource 3. 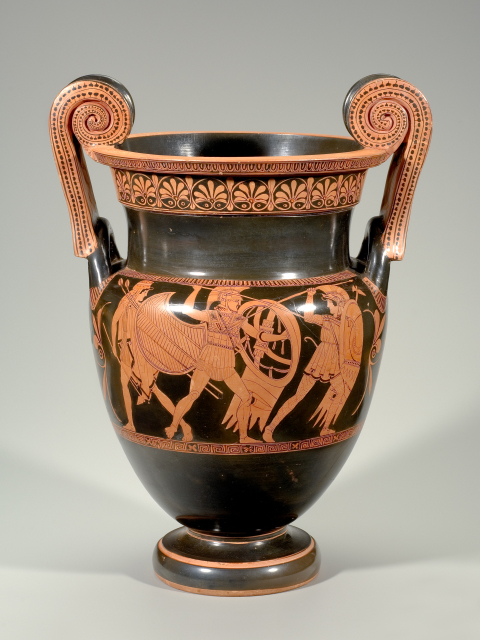 Both sides of this vase depict scenes of the Trojan War. One side shows a tribute offered by family members as a soldier leaves for battle. The reverse side shows the clash between the Greeks and the mythical Amazons where Greek hero, Achilles kills the Amazon queen, Penthesilea.

This large piece of pottery, known as a krater, would likely have been the centerpiece at the parties of a Greek aristocratic family.

The first Olympic games began in Olympia, Greece in 776 BCE. To learn more about these first games, see the video above.

Because of his ability to swiftly travel between the world of the mortals and the world of deity, Hermes was the messenger of the gods. But this was not his only role. He was also the protector of human messengers, merchants, and thieves and guides the souls of the dead to the underworld.

Take a look at the panoramic view above which shows the mountain that Hermes was born on.

As a newborn, Hermes left the cave he was born in and killed a tortoise and fashioned its shell into a lyre. He then tricked his older brother, Apollo, into trading all his cattle for the lyre he had just made. Hermes is not just the messenger god, but the god of all things exchange. He exchanges information, goods, and souls.