Kente (ken-tay) is a type of cloth from Ghana. At one point in history, only royalty wore garments or wraps of kente cloth. According to Ghanaian oral history, two young men first created kente cloth after they saw a spider weaving a beautiful web. They attempted to weave something just as beautiful, and designed kente cloth for the first time. Today, kente is extremely popular and well-known not only throughout Ghana, but around the world. Although today many different people may create kente, weavers from the Asante and Ewe people in Ghana have the longest histories of producing this fabric. 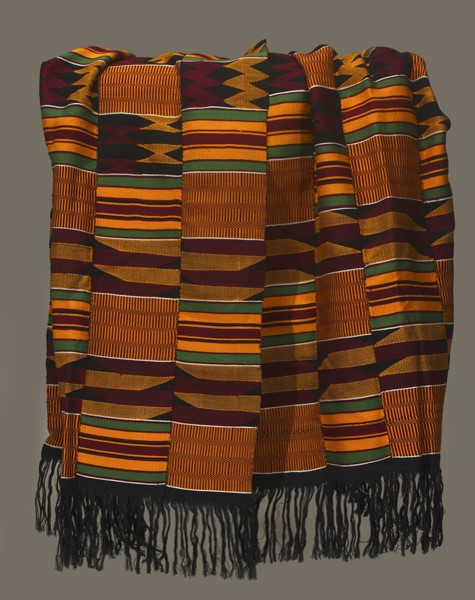 Kente and the African Diaspora

What is the African Diaspora? A diaspora is a large group of people with a similar heritage or homeland who have since moved to places all over the world. The African Diaspora consists of the worldwide collection of communities descended from Africans. The African diaspora primarily formed due to the forced movement of Africans during slavery.

Kente cloth is woven in both Asante and Ewe communities in Ghana and in Togo. The weaving techniques are more similar than they are different. However, the kente weaving of the Asante people is internationally well-known partially because of the history of the Asante people. The Asante people fought against the British as they entered Ghana exploring for resources, including gold - Asante gold. After decades of colonization, Ghana won independence from British rule in 1957. Before British colonization, since the 12th century, kente had been reserved for royalty. After independence, it became a symbol of Ghanaian power for politicians.

As the world watched emerging leaders like Nkrumah, the African diaspora around the world began to associate kente with not only Ghana, but an African identity more generally. Kente dramatically rose in popularity when famous boxer Muhammad Ali wore one (given to him by Nkrumah) during his visit to Ghana in 1964

The students in this photo are not Ghanaian and are not in Ghana. They are African American and they’re graduating from Indiana University Bloomington! However they are wearing graduation stoles with kente patterns and colors. Kente cloth has become known as the most recognized fabric from the African continent. People living in the African Diaspora, including African Americans, may wear kente cloth and kente-inspired clothing to show their connection to the continent. Kente serves as a symbol of connection to the African continent from all over the globe.

How do you make kente?

Kente cloth is a woven fabric created on a loom. Weavers begin by weaving thin strips about 4 cm thick and then move on to interlacing these strips into a large fabric cloth. Traditionally, men in the Asante and Ewe cultures are the weavers. The process involves a loom, bobbins, a heddle and lots of creativity. The weaver must have an idea of their design before they begin weaving. Many will add their personal styles to a traditional pattern, creating kente cloth that both honors tradition and is unique.

Kente cloth up close - examine the detail of the weaving.

Watch Bob Dennis Ahiagble demonstrating kente weaving. You can also read about this family of master weavers in “Master Weaver from Ghana” by Gilbert “Bobbo” Ahiagle & Louise Meyer (see Recommended Reading resource). Kid World Citizen provides two different “Create Your Own Kente” activities - one with painting and the other with paper weaving.

Explore how colors have specific meanings within kente cloth weaving. The Ultimate History Project’s article on the history of kente, specifically examines the significance of colors and patterns.

Here students from the University of Virginia receive kente stoles during the Donning of the Kente Ceremony. They discuss the significance of kente and especially the Adinkra symbols included on the stole.

Adinkra are symbols that represent concepts and are extensively used in Asante culture. They can be found on fabric, pottery, furniture, and even architectural features. Adinkra symbols have a decorative function but also represent messages that convey traditional wisdom, aspects of life or the environment. They are often linked with proverbs from Asante culture.

According to Ghanaian oral history, kente cloth was first created when two young men stumbled upon Ananse the spider weaving a beautiful web. By mimicking the actions of the spiders, they created Kente cloth the same way. This story shows the harmony between Ghanaians and Mother Nature. It also introduces us to the Ghanaian character, Ananse (also spelled Anansi) the spider.

Ananse the spider is a trickster character is Ghanaian children’s stories, told in oral stories and in books. Ananse the spider stories usually have a moral or tell the story of a tradition in the community. These stories are told to children in order to pass knowledge down and to teach them something that the community finds to be important.

There are dozens of retellings of Ananse/Anansi stories by numerous authors. Akan-Twi is the most commonly spoken language in Ghana. The Akan-Twi spelling of the character is Ananse; however, the spelling most commonly found is Anansi. This is because of British colonization of Ghana and something called anglicization. Anglicization is when foreign language words are changed in order to make them easier to spell, pronounce, or understand in English.

As an introduction to or a transitioning moment in studying this kente cloth, we recommend the following titles for the classroom: